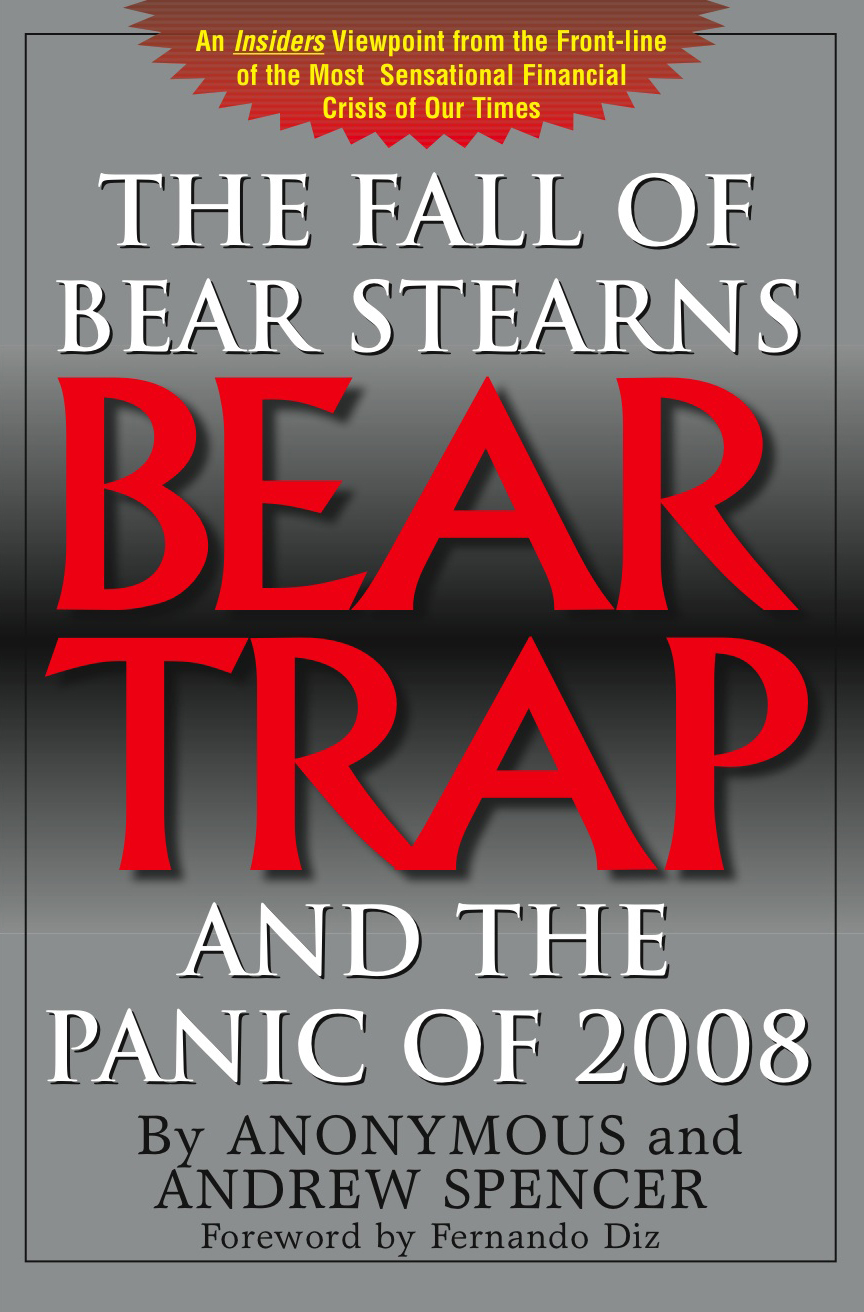 Riding the storm was something Bear Stearns had done many times in its 85-year history, but it took only a few days, an increasing sense of panic, and a critical email, to spell the end for this one-of-a-kind investment bank that ended up being taken over for a pittance. 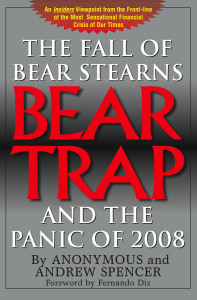 Bear Trap – The Fall of Bear Stearns and the Panic of 2008 (Brick Tower Press, New York) was written, with the help of Andrew Spencer, by an anonymous senior executive of Bear Stearns whose identity will not be revealed until the release of this dynamic book on September 22, 2008.

The writer takes the reader step-by-step on the downward spiral of this giant corporation beginning March 10, 2008 through its final demise and takeover. Find out from someone on the inside if the company was really headed down the drain financially or was it all a big rumor-mongering, manipulative ploy to allow some far-sighted predator to make a killing? How did the giant respond when financial institutions they had traded with for years asked if Bear had the cash to execute their trades? Was the challenge of their financial liquidity borne of facts or engineered rumor? This book takes you through each nerve-wracking minute of every action that took place in the offices of Bear Stearns during its final days. In a business based on confidence, when that confidence fades, so does the business. The Company was scrambling to prove their counterparties were being paid, trades were clearing and business was picking up – surely not the normal scenario for an investment bank’s collapse. On the day prior to the announcement, a member of senior management was in total disbelief when he realized that “ … a cup of coffee at Starbucks was now actually more expensive than a share of Bear stock.”

This tell-all book is a must-read for anyone who wants to know how fortunes were made and lost virtually overnight, placing blame where it belongs for the responsibility of ‘killing the Bear.’ Feel the pain of the employees when they realize they have lost it all: “The Bear was dead. The carcass was rotting in the street as people hurried past, lest they catch whatever it was that had killed the Bear.”

Antarktos Rising is the latest science thriller from the inexhaustible imagination of Jeremy Robinson. This prolific writer has a great deal to be proud of, having suffered through many hard times, often at near poverty level. Not one to give up easily, he self-published The Didymus Contingency in 2005, which became a Barnes & Noble on-line best-seller. With that under his belt, he started Breakneck Books the following year using three credit cards, and self-published Raising the Past, as well as publishing the works of ten other authors. He later received a massive investment for Variance Publishing which absorbed Breakneck Books, and signed two separate three book deals, one with Variance and one with Thomas Dunne, an imprint of St. Martin’s Press. Adding to this success, he secured an animated feature film deal for Antarktos Rising, which has a blockbuster big budget and will be released in 2010. Jeremy Robinson is a force to contend with – in spite of the hardships he endured, he never lost sight of his goal to succeed. His is an amazing story and a courageous example of the American spirit that never gives up.

Jeremy’s latest novel, Antarktos Rising, is the story of an epic journey to a new world after a phenomenon, known as crustal displacement, shifts the earth’s crust and repositions continents, causing countless deaths. As the world struggles to take care of its displaced billions in the wake of this global disaster, Antarctica emerges as a new hope. The leading nations devise a competition – a race to the center of Antarctica – with the three victors dividing the continent. A survivor in this race is Mirabelle Whitney, a photographer, who joins an American Special Forces unit and comes to realize there is a danger on this new continent far worse than the evil intentions of her fellow man. Jeremy has received rave reviews for his work from numerous NY Times best-selling authors, including Steve Berry (The Charlemagne Pursuit), James Rollins (The Judas
Strain), Stel Pavlou (Decipher), Steve Alten (The Shell Game), and Scott Sigler (Ancestor). Visit Jeremy’s website at www.jeremyrobinsononline.com.

Jeremy currently resides in Barrington, New Hampshire, with his wife and family.