“The world’s most expensive jacket is here! Valued at ten million dollars, it was first revealed in a private unveiling in Beverly Hills, CA, on February 18, 2019,” says designer Farrah Gray. The unveiling took place at Peter Marco’s world-renowned, extraordinary jewelry store on the world-famous, ultra-posh Rodeo Drive. It’s stunning, to say the least!

The jacket is available at Peter Marco’s Extraordinary Jewels, 252 North Rodeo Drive in Beverly Hills, CA. This diamond bejeweled jacket was designed and created with award-winning fashion designer Farrah Gray, and this beautiful jacket is a piece of art, bedazzling over 460 carats of flawless diamonds. It is a piece that will never be reproduced!

The world’s most beautiful trendsetters and tastemakers who can appreciate it, nicknamed it “The One.” It is constructed of 100% black python leather, featuring a posh, silk interior lining. This beautiful and handsome jacket is handmade using the finest of quality materials and fabric. “Sewn together with 99% GIA certified diamonds by Peter Marco, it is truly a one-of-a-kind art installation and jacket for the fashion extraordinaire with ten million dollars to spare!” says Gray.

“The jacket can be worn by the opulent man or woman who yearns for quality, taste and extravagant, stunning works of art when rubbing shoulders with their elite colleagues. It sets a new world record and a new standard of high couture fashion and wearable art.”

Viewings are by appointment only. A percentage of the proceeds will go to several charitable organizations chosen by the purchaser. It is available now, exclusively at Peter Marco Beverly Hills. “And it is the first of its kind in any line of diamond bejeweled jackets in the world,” adds Gray.

For more information, visit or follow Farrah Gray and Peter Marco on Instagram at www.Instagram.com/petermarco90210 and www.instagram.com/farrahgray_ .

Interviews are available upon request with Farrah Gray and Peter Marco who will be accompanied by the ten million dollar bejeweled jacket.

Old Forge, PA. From Modern English and the Hooters to Bananarama and the B-52s, the music of the 1980s bounced to a distinctive beat that defined the decade as one of the last great glory eras of pop music. And thanks to the dawn of MTV and shows like “Friday Night Videos,” a generation of music lovers suddenly had faces — and often elaborately staged mini-movies — to make the music’s messages stick.

To get to the heart of what made this decade’s music so special that it still streams endlessly in businesses and on satellite radios everywhere, music journalist Jim Beviglia weaves an en-tertaining narrative of the stories behind the phenomenal pop music era in Playing Back the 80s: A Decade of Unstoppable Hits.

Anyone who’s ever rocked a mullet or painstakingly made a mix tape will find memories in every line of lyrics as Beviglia delves deep into the creative process with artists such as Huey Lewis, Rick Springfield, Kim Carnes, Vernon Reid, Dennis DeYoung, Colin Hay and Eddie Money. All told, Playing Back the 80s features original interviews with more than 60 artists, producers, session players, writers and others who were directly involved with the most memorable songs of the decade, sharing the stories of how they created — often against im-posing odds and in the midst of bizarre circumstances — the unstoppable hits and unherald-ed gems that still enchant so many fans today.

Playing Back the 80s will have music fans pulling their old cassettes out of storage and re-membering when and where they heard the songs first. For those who didn’t grow up in the 80s, this endlessly fun book will show them what the fuss was all about and maybe reveal a few surprises along the way. 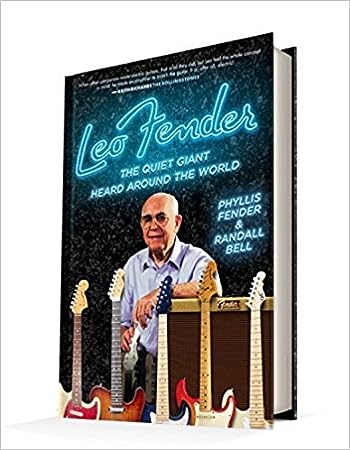 Fullerton, CA ― The world occasionally produces one of those rare thinkers whose name becomes iconic.

Fender grew up in Fullerton, California, where his interest in electronics lead him to open his own radio repair shop in 1938. It wasn’t long before musicians and band leaders turned to him for help in repairing their equipment.

And the rest, as they say, is history.

While his name is synonymous with fist-pumping rock and roll sound, in reality, Fender was a shy, unassuming inventor who was nearly deaf and had one glass eye.

In 1946 he founded Fender Electric Instrument Manufacturing Company — the launch pad for his most iconic designs — and later on, G&L Musical Instruments.

And now, his wife Phyllis Fender gives readers a memory-filled look into the wonderful world of this quiet genius in the book, Leo Fender: The Quiet Giant Heard Around the World. The book was co-written by Randall Bell, Ph.D., who grew up in Fender’s neighborhood and whose father was the head of the R&D department at Fender’s company.

Fender’s game-changing contributions to the music world have been widely recognized. He was presented with the Country Music Association Pioneer Award in 1981; was inducted into the Country Music Hall of Fame, the Rock Walk of Fame and the Rock and Roll Hall of Fame. His accomplishments were also acknowledged with a Technical Grammy Award in 2009. Fender died in 1991.

Today, Fender is a household name. But the quirky, shy inventor never lived large or flaunted his fame. He lived in a mobile home, even after selling his company for $300 million (in today’s dollars). His daily routines and obsessions made him truly fascinating, and thanks to his enduring instruments, Fender’s legacy forever lives on.

Author Phyllis Fender volunteers at the Fullerton Museum where she shares with visitors stories about her life with Leo. She also serves as the Honorary Chairman of G&L. Twenty-two years ago, two different doctors told Phyllis that she had six months to live. Today, both of those doctors are dead, and she is here to finally tell this remarkable story.


(This press release may be reprinted in part or entirety by any print or broadcast media outlet, or used by any means of social media sharing)

Port Orange, Florida ― Winter sports fans who crave the speed and intensity of the bobsleigh can now experience the thrills from the pilot’s seat with the Bobsleigh 360 app for Android and iOS.

Users can experience the precision of the team’s climb into the sleigh, the struggle of the push-off, and mind-bending speeds approaching 90 mph as the bobsleigh races down an Olympic bobsleigh track, banking through 15 to 20 heart-stopping turns.

• 360-degree video of actual bobsleigh runs
• User-controlled viewpoint during the run
• Support for 2D and VR viewing
• New runs and tracks added as they are available
Bobsleigh 360 is based on a first-of-its-kind VR training tool developed by Raydon Corporation, a military simulation training company, in Port Orange, Florida. Raydon created the training tool to improve the safety and performance of bobsleigh teams. Bobsleigh 360 gives coaches a 360-degree view of a pilot’s high-speed run, where every millisecond counts. It can be viewed on a tablet or on a VR headset for a fully immersive experience. The Latvian bobsleigh team, silver medal winners at the 2014 Winter Olympics in Sochi, has incorporated the tool into their training regimen in preparation for the 2018 Winter Olympics in PyeongChang, South Korea. Raydon has donated the training tool to Latvia and other countries.
For more information, please visit: www.bobsleigh-360.com and www.raydon.com.