EXTRA! EXTRA! Read All About It!

EXTRA! EXTRA! Read All About It!
Whahooo! Another one of our authors hit the NY Times bestsellers list! (01/22/17)
Yay! We are so happy for you, William Forstchen! We couldn’t be more excited! 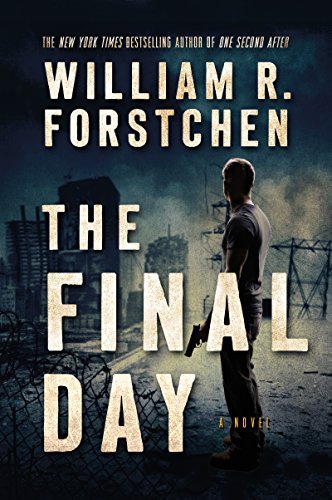 The Final Day by New York Times best-selling author William R. Forstchen gives a chilling glimpse into an America ripped apart by both an EMP attack and a government hell bent on surrendering parts of the nation to foreign countries.

With our nation still at odds over the result of the presidential election, military historian Bill Forstchen offers something for both sides of the political aisle in a riveting plot that has citizens united in an attempt to preserve a beloved America. While The Final Day is third in the riveting John Matherson series, the first has already been optioned for a movie by Warner Brothers.

Bill Forstchen makes a dynamic guest. Please read the following press release and let me know if I may schedule an interview with him, or forward a copy of the book for a review from you. If you’d like to run this story, I’d be happy to send you .jpgs of the author and the book cover. Thank you.

“Like its two predecessors in the Matherson series, this new novel entertainingly blends folksy and sophisticated, small-town nostalgia and sharp futurism…a thoughtfully rendered, richly detailed investigation into the ‘What if.'”
—Kirkus Reviews, on The Final Day

Black Mountain, NC – Fans of John Matherson and his fierce brand of patriotism were thrilled when The Final Day, third in the series by New York Times bestselling author William R. Forstchen, was recently released by Forge Books.

Months before publication, Forstchen’s One Second After was cited on the floor of Congress as a book all Americans should read. Film rights to that novel have already been optioned by Warner Bros. The riveting story of our nation’s struggle to rebuild itself after an electromagnetic pulse plunges the country into darkness, starvation, and death was followed closely by the acclaimed One Year After, continuing the Matherson saga.

The Final Day picks up after John Matherson and his community defeat the designs of the alleged federal government. Now they have returned their attention to restoring the technologies and social order existing prior to the EMP attack. When the government announces that it is ceding large portions of the country to China and Mexico, General Bob Scales is sent to confront Matheson. The Constitution is no longer in effect, and what’s left of the U.S. Army has been deployed to suppress rebellion in the remaining states.

General Scales is John’s former commanding officer and closest friend from prewar days. Where do his loyalties fall? Might he be the crucial turning point in the quest for an America that is again united? When news breaks that members of the federal government knew an EMP attack was coming long before it hit, the government might get exactly what it fears: revolution.

William R. Forstchen is the New York Times bestselling author of One Second After. He holds a Ph.D. in history from Purdue University, with specializations in military history and the history of technology. Forstchen is currently a faculty fellow and professor of history at Montreat College, near Asheville, North Carolina.

Publishers Weekly, on One Second After: “An entertaining apocalyptic thriller.”

Stephen Coonts, New York Times bestselling author, on One Second After:
“Forstchen is the prophet of a new Dark Age. The wise will listen.”

• The frightening specifics about EMP
• An EMP attack: merely a sci-fi story or a reality?
• The societal impact of an EMP attack
• Hour-by-hour, day-by-day, month-by-month details on the effect an EMP attack would have on a community
• What, if anything, can be done to protect ourselves and our country against an EMP attack
• Why Dr. Forstchen decided to write the John Matherson series
• Speaker Newt Gingrich’s influence on One Second After
• The research Dr. Forstchen did to write the John Matherson series, and why he found what he discovered so disturbing
• Why he decided to make One Second After so personal by setting it in his hometown and using characters, including a daughter, based on people he knows
• Why he has been selected to submit a breakdown on the impact of an EMP attack to an agency within the Pentagon
• Will Dr. Forstchen’s research be used to change Congressional policy and other lawmakers?
• How does this affect our national security? Is our government preparing for such a threat? If not, why?
• What American history has to do with the technological threats of today
• Discuss the current political environment and how our president-elect should be preparing to lead our national security
• Climate change (both sides of discussion)
• Anything related to survivalists and preppers
• Why this series is such a huge success; the “making of” (his background and what inspired him to write this)

Ascot Media Group is a Public Relations (PR) Firm based in Friendswood, Texas. Our PR Group specializes in custom and basic PR Campaigns for first time authors to NY Times bestsellers. Our publicists are aggressive go-getters and know how to pitch your book to the nationals! We have been voted #1 for Book PR numerous times, and have had the privilege of helping many authors hit the NY Times bestsellers list. See our testimonials at: http://www.ascotmedia.com/testimonials.html

Ascot Advertising, (a division of Ascot Media Group, Inc.) specializes in all of your advertising needs: TV, radio, newspapers, magazines, Internet, social media, social networking, search engine optimization (SEO), Internet advertising campaigns, etc. We are a full service agency and can cover all of your marketing needs. Visit us at: http://www.ascotadvertising.com/

If you are looking for low cost public relations and/or advertising, or simply just want to see yourself on television, we are the PR and Advertising Gurus of the century. Call us at 1-800-854-1134 Today!